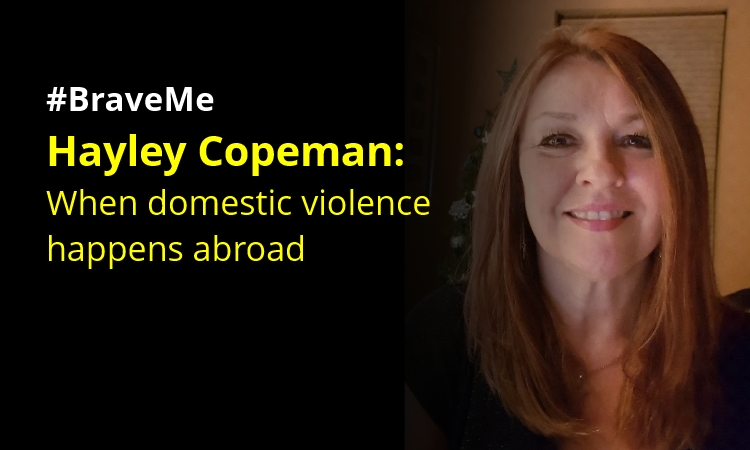 Domestic violence knows no boundary. What happens when your partner attacks you when you are on vacation? Hayley Copeman shares her #BraveMe story with us.

All my life I’ve suffered from low self-esteem, low self-confidence and a huge fear of rejection. I was given up for adoption as a baby and a series of other life experiences added to my insecurities.  For a lot of my life I’ve struggled with depression, anxiety, self doubt and low self worth.

Three years after separating from my husband I started seeing a man I’d known for some time. I knew he had been in prison years ago for violence and had a conviction for domestic violence on a previous partner dating back ten years. I believed he was a changed man and in the time I’d known him I found him to be a good guy.  He told me he’d had a poor relationship with his family and had lots of demons. He said we could help each other and he described me as his soul mate. He suffered from epilepsy and I really did see him at his lowest. Caring for him after a fit,paying for holidays, and taking him places made me feel worthwhile for the first time ever. Everything on the whole was fine for the first year then he told his landlord where to stick his flat and moved in with me.

That’s when things started to worsen. He’d always had a temper, an issue with alcohol and liked to gamble. He would frequently tell me we were finished and walk out which was terrible for my mental health. Then he’d come back but tell me I had to change in order for him to stay. Then came the insults, the digs, then he pushed me across the room a few times, then a slap, leaving me to walk home alone after nights out but no beatings. Looking back he was very controlling and exhibited coercive behaviour.

In September 2018 we went on holiday to Skiathos. The holiday wasn’t the best as we were caught in the middle of a cyclone, my mobile phone “disappeared”, we were stuck in the hotel room for 3 days. Then on our final day the sun came out, we had a lovely day on the beach then a lovely last night meal. He wanted to drink, I didn’t. I had a couple then he kept trying to make me drink more but I didn’t as we had an early start the next morning and a long journey ahead.

He would frequently tell me we were finished and walk out which was terrible for my mental health. Then he’d come back but tell me I had to change in order for him to stay.

We were watching a football match in a bar. He bought me a double vodka and coke despite me asking for a diet coke. I didn’t drink it. Bearing in mind there had been a cyclone a lot of the roads were still blocked and the electric was off in remote places the walk back to the hotel was going to be a challenge.

We set off on the dark, muddy country road. The strap on my shoe broke and I couldn’t keep up with him. He started pushing and pulling me along the lane then he totally lost it. He punched me in the head and face. I was cowering on the floor and he kicked and punched my legs, arms , stomach, head, everywhere basically. I managed to get up and try to get away from him. He pulled me back with the waistband on my jeans so hard that they ripped down to the back of my knee. This seemed to shock him and I was able to scramble back to the bar we’d left earlier. Two ladies looked after me, covered me in a blanket to save what was left of my dignity and called the police. The police questioned me then came back with me to my hotel room and took him away with his passport and suitcase.

He bought me a double vodka and coke despite me asking for a diet coke. I didn’t drink it.

I was in a foreign country having to face travelling home alone, injured and covered in bruises. This took everything I had. I’ve always been afraid of flying but when you’re sat alone knowing the person who assaulted you is on the same plane it was awful. I got through security and collected my suitcase without seeing him then I returned to my car leaving him at the airport.

The police questioned me then came back with me to my hotel room and took him away with his passport and suitcase.

When I arrived home I changed the locks, got a new phone with a new number and blocked him from social media. I contacted his cousin to arrange for his belongings to be collected and I left them in my garden.

I’ve thought long and hard since the assault. I’m a survivor not a victim. I decided to speak out to raise awareness of Domestic Violence and in particular what happens if you’re in a foreign country. I found to my dismay that if you don’t tell the Greek police that you wish to press charges they let the perpetrator go. When I contacted the police in the UK they couldn’t do anything as the crime happened abroad!

I wrote a blog and shared it on Facebook and Twitter. I’ve had lots of support following the blog but I’ve also been proactive in seeking help and reading information about Domestic Violence and coercive control.

I’m a survivor not a victim.

Four months later it still hurts, I can’t believe I became a victim of DV, I can’t believe there are people who don’t believe me and who thought I may have deserved it. I have to battle with my thoughts as I’m not letting this minority set me back into a downward spiral mentally.

There were times prior to the assault when I used to wonder how I would get away from him as he lived in my house and would be homeless if I threw him out. He used to tell me  he would never let me go.  He warned me that he was a vindictive person who never lets things go.  I felt I was stuck with him for life and I could never get rid of him. So the way it happened meant that as I left him at the airport he never returned to my house. I don’t know where he went and I don’t care.

I’ve been lucky that my family and friends have supported me.  Telling them what had happened to me was a difficult thing to do because most of them had warned me this was how it would end.  As I live on my own I’ve thought of ways to minimise any risk such as varying my routine, taking the dogs out for walks on different routes going to work at different times.  I always keep my doors locked.  It’s become second nature now to bolt the door as soon as I enter the house.  So many nights have been spent reading articles on building my self esteem in a bit to learn to love myself therefore never finding myself in a similar situation in future. I’m no longer scared of doing things. I never thought I’d be able to fly on my own, I never thought I’d be able to raise awareness of domestic violence but I can and I have. I think it’s important to remember that none of this is your fault. This picture sums things up.

I’ve been lucky that my family and friends have supported me.

It was so difficult on my return to the UK to find that the police here couldn’t do anything because the assault happened abroad. They took a statement from me about his controlling, coercive, abusive behaviour prior to the assault but as I had no real evidence as I’d not reported anything it was my word against his. They took him in for voluntary questioning and he told the police I beat him with the dog lead, I was controlling and wouldn’t let him go running. All lies!

If you find yourself in a similar situation or know someone else who is please speak out. There are many agencies you can contact. The Freedom Program run programmes for people in your situation and produce a book which highlights bullying, manipulative and coercive behaviours. Talk to the police, your GP, your local women’s refuge, a friend anyone. Keep a journal of dates and evens when things have happened to you. You can get out of your situation and there is life after DV. I’m proof of that. Its not well advertised but your local council can provide help. I have a panic button which goes through to the police control room, a camera in my garden, deadlocks on my doors, all from the council. I didn’t get these straight away but exactly a week after my ex was questioned by the police someone put my window through – that’s when I was pointed in the direction of the council.

It was so difficult on my return to the UK to find that the police here couldn’t do anything because the assault happened abroad.

To keep strong I’m challenging myself to different things- Dry January and RED January (run every day in January) being the first two. I’m also starting volunteering for Safenet so I can continue to raise awareness and help people. I used to be a keen runner, not good but keen. He stopped me running. I’m now back running and the social side of it is brilliant. I’m not suggesting everyone should run but join some sort of club/activity which allows you to meet like minded people.

The most important thing is to learn to love yourself. That way you won’t need to rely on people and if you do end up in a similar situation in the future you’ll be brave enough to walk away. 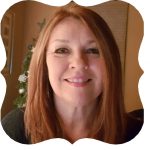 My name is Hayley Copeman. I am 51 years old, divorced with two grown up sons, two dogs and two cats. I enjoy reading, running, and blogging. I am a huge fan of Burnley Football Club. I am a diabetic and survivor of Domestic Violence.
Follow Hayley: Blog 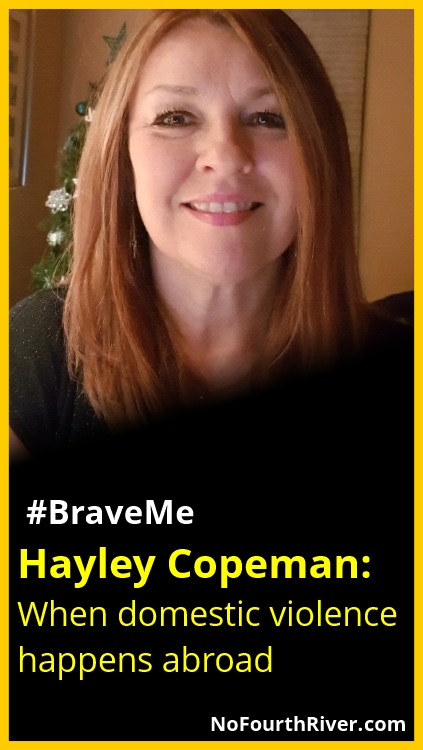